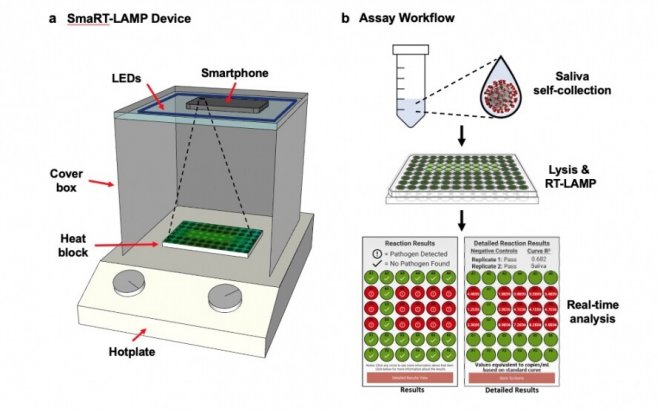 To date, the most accurate method for detecting the SARS-CoV-2 virus in the body is the PCR test. A fluid sample from a patient’s mucosa is subjected to a polymerase chain reaction to cause amplification of the genetic material of the virus. The technology is reliable, but it requires laboratory conditions to implement it, so scientists from the University of Santa Barbara (USA) have developed an alternative that can work with a regular smartphone.

Simply put, during amplification, many copies of the genetic material of the virus are created, its biomass is multiplied, and it becomes easier to detect. In order to stimulate the coronavirus to replicate in huge quantities, during the PCR procedure, it is subjected to temperature changes from 50 to 95 ℃ dozens of times. But even after that, special equipment is required to detect the virus.

An alternative method called “loop isothermal amplification” was developed several decades ago, and it avoids a complex temperature cycle. The downside is increased sensitivity, in particular, the influenza virus can be identified on the first try, but it took scientists more than 500 attempts to detect SARS-CoV-2. Fortunately, today this problem has been successfully solved.

The result of the work of American scientists was a simple installation with a heating panel, an LED system and a smartphone, the camera of which monitors changes in the sample under study. One test takes 25 minutes and costs $7, which is several times cheaper than a PCR test. But what is even better is the versatility of the technology – with the help of interchangeable reagents, it allows you to identify many other viruses.