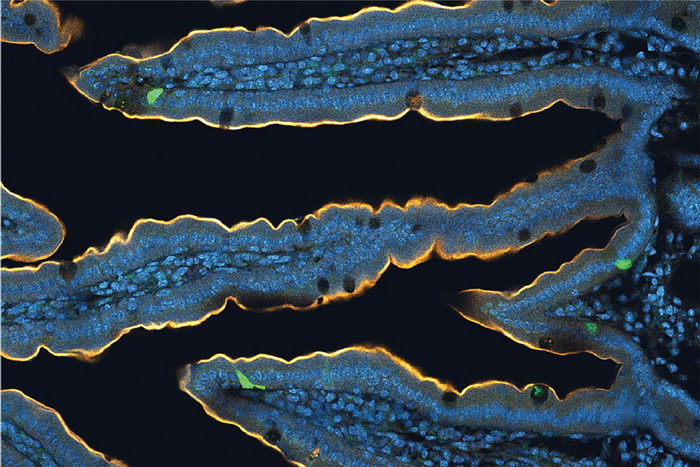 Special intestinal cells sense the difference between real sugar and sweetener, which they report directly to the neurons of the vagus nerve.

Regular sugar is made up of the carbohydrate sucrose, which in turn is a combination of fructose and glucose molecules that act on sweet taste receptors. But there are still quite a few sweet-tasting substances in the world, and some of them are hundreds and thousands of times sweeter than sugar. However, sugar tastes better, both for us and animals, and the reason for this is special cells in the intestines.

A few years ago, researchers from Duke University found that some intestinal cells have receptors similar to those found on taste cells in the mouth and olfactory cells in the nose. These cells, called neuropods, were connected directly to the neurons of the vagus nerve, which has several branches that lead to various internal organs, including the intestines. When intestinal cells with receptors sensed sugar carbohydrates, they released the neurotransmitter glutamic acid, stimulating the vagus nerve. Since one of the functions of the vagus nerve is to control digestion, a timely reaction to sugar probably helps to tune the activity of the intestine so that it absorbs as many energy-friendly carbohydrates as possible. At the same time, the brain can adjust eating behavior depending on what information comes from the intestines through the vagus nerve.

But then the researchers decided to compare how the same cells would respond to the sweetener. Mice were injected with either sugar or sucralose into their intestines while simultaneously measuring the activity of vagus nerve neurons. It turned out that an average of 40.7% of neurons are excited to sugar, and 22.2% to a sweetener. In an article in nature neuroscience It is said that sugar and sweeteners are sensed by two different receptors in the intestinal cells. True, it needs to be clarified here that if an analog of sugar is used as a sweetener, then neurons are just as excited from intestinal cells as they are from real sugar.

Then followed experiments in which neuropod cells were modified by optogenetic methods: genes were introduced into them that made them sensitive to light, and now with the help of light they could be activated or put to sleep. At the same time, the researchers had to adapt the optogenetic approach to the intestine: the fact is that the light in such experiments is supplied to the modified cells through a special fiber. When it comes to the brain, there is no problem, but the intestines are a flexible organ that is constantly moving. It was necessary to figure out how to put light into the mouse intestines, and do it in such a way that you can observe how the mouse behaves, how it reacts to sugar and sweetener.

One way or another, the problem was solved, and the role of neuropod cells was finally confirmed: if they were turned off, the mice became indifferent to sugar – in the sense that they ate it as little as a sweetener. If the neuropods were additionally activated, the mice began to like sucralose – it became as tempting for them as sugar. Corresponding changes also occurred in the neurons of the vagus nerve: if the neuropod cells became inactive, then the neurons became the same, if the neuropods were stimulated, the neurons began to become more active than usual.

Why did the intestines need special cells with receptors that can distinguish real sugar from fake? Obviously, in order not to waste time and effort on the absorption of the sweetener, because, unlike real carbohydrates, there is no nutritional benefit from it (and sugar, as we know, is a source of affordable and plentiful calories). The vagus nerve evaluates signals from neuropod cells, and if the sum of their activity is low, the brain concludes that it is better to look for some other food. True, here it must be said again that the receptor cells in the intestine can be deceived by slipping them a sweetener that mimics real sweet carbohydrates well.

It can be assumed that there is a similar system for fats and proteins with amino acids, that there are special cells that evaluate the calorie content of different fats and proteins, and that they also affect our taste preferences, but without additional research on this topic it is better not to fantasize.