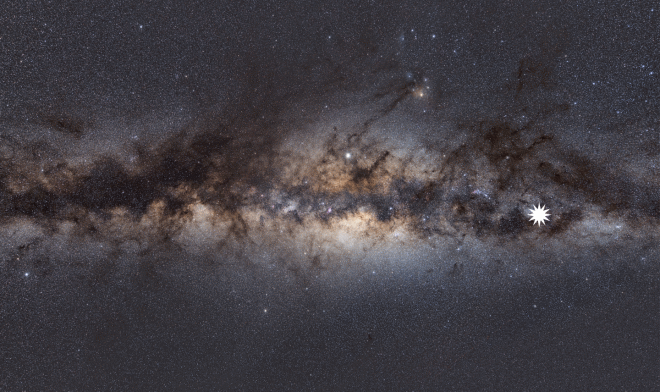 The location of the signal source in the Milky Way

Australian student Tyrone O’Doherty of Curtin University was intern on the Murchison Widefield Array radio telescope when he spotted an unusual object in the Milky Way. More precisely, the object itself has not yet been found, scientists have only the direction from which the “impossible” signals come from, plus the approximate distance to it – about 4000 light years. It’s very close, and it’s all the more surprising that astronomers haven’t come across it before.

The source sends pulses 30-60 seconds long, strictly every 18.18 minutes. The radiation goes over the entire frequency spectrum, but the light radiation is polarized by 90% – this is clearly a natural object with strong magnetic fields. The archive has similar data for 2018, when the object emitted pulses with interruptions of several months, but then fell silent for many years. However, this is not accurate – rather, astronomers simply did not pay due attention and did not record its signals.

The main mystery lies in the frequency of radiation – for pulsars it is milliseconds, for magnetars it can reach 10 seconds. And the measured data in 18 minutes simply do not fit into the calculations. Even if we assume that we have a unique combination of a pulsar with a magnetar, we still have to admit that there is also some kind of anomaly here. Probably, because of it, either the neutron star itself rotates unusually slowly, or it is a magnetar with an extremely long period, or something blocks the radiation, occasionally letting it out.